Tickets starting at $35 on sale now 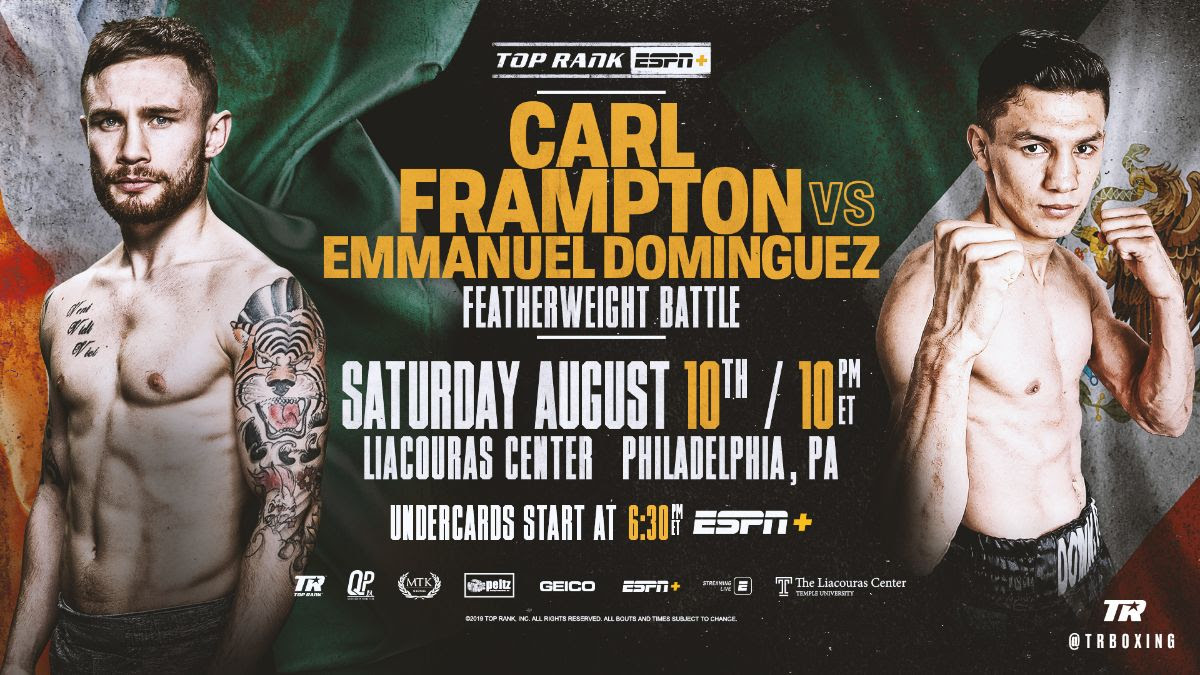 PHILADELPHIA (July 2, 2019) — Carl “The Jackal” Frampton is on the hunt for another world title. Frampton, the former two-division world champion from Belfast, Northern Ireland, will make his first stateside appearance in more than two years in a 10-round featherweight bout against the hard-hitting Emmanuel Dominguez on Saturday, Aug. 10 at the Liacouras Center.

Promoted by Top Rank, in association with Peltz Boxing, tickets, priced at $100, $55 and $35 (not including applicable fees), are on sale now and can be purchased at the Liacouras Center Box Office and www.liacourascenter.com, or by calling Peltz Boxing at 215-765-0922.

"Dominguez is a tall, young, hungry featherweight, so I'll need to be on my game,” Frampton said. “The premise of an Oscar Valdez fight is dangling in front of me, so I want to go out and show the world that I've still got what it takes to be a world champion. Winning is always the most important thing, but I want to do it in style. It's great to be boxing stateside again. And Philly, in particular, has so much boxing history. I'd like to thank MTK Global and Top Rank for giving me the opportunity. I won't disappoint."

“Carl Frampton is already looking ahead to an Oscar Valdez fight, which gives me added motivation,” Dominguez said. “I am not a stepping stone. I am coming to Philadelphia prepared to ruin Carl’s plans.”

Frampton (26-2, 15 KOs), a 10-year pro who compiled more than 100 victories during a standout amateur career, is on the road back to another world title opportunity following his competitive decision loss to IBF featherweight champion Josh Warrington last December. Frampton won the IBF junior featherweight world title in 2014 and unified titles against WBA champion Scott Quigg via split decision in February 2016. He upset Leo Santa Cruz to win the WBA super world featherweight title in July 2016 but lost the immediate rematch six months later.

Frampton won three in a row, including an interim world title, before running into Warrington in front of a sold-out Manchester Arena crowd in one of the year’s best fights. With his sights set on Valdez, he must first defeat Dominguez (26-8-2, 18 KOs), a 25-year-old native of Aguascalientes, Mexico, who has won four of his last five, all by knockout.

Use the hashtag #FramptonDominguez to join the conversation on social media.

ESPN+ is the multi-sport, direct-to-consumer video service from The Walt Disney Company’s Direct-to-Consumer and International (DTCI) segment and ESPN. It reached 2 million subscribers in less than a year and offers fans thousands of live events, on-demand content and original programming not available on ESPN’s linear TV or digital networks, along with premium editorial content.

ESPN+ is available as an integrated part of the ESPN App (on mobile and connected devices) and ESPN.com. They are the industry-leading all-in-one digital sports platform, delivering a rich, personalized experience to tens of millions of fans every month.

THE KROLL SHOW: Paul Kroll puts attempted murder charges behind him in quest for glory